First of all, thanks so much for all the kind words and support you all showed concerning my blog post about the lack of black boys in middle grade literature. (Also, be sure to check out the comments—lots of good stuff there.) I’ve been thinking about it a lot, and while I don’t have a definitive solution to the problem, there are some things I know I can do to make a difference, such as: 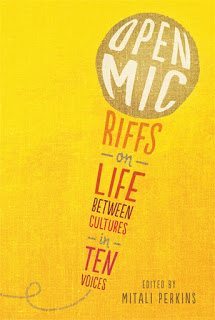 Finally, I can’t believe I haven’t posted about this, but I’m proud to be one of ten authors featured in the upcoming anthology, Open Mic: Riffs on Life Between Cultures in Ten Voices (Candlewick, Sept 2013). The anthology, edited by author Mitali Perkins, has already been named a Junior Library Guild selection and will also be released as an audiobook. You can learn more about the anthology on Facebook and at the Candlewick website.

Here’s the full list of authors in order of appearance:

“Confessions of a Black Geek” by Olubemisola Rhuday-Perkovich

“Under Berlin” by G. Neri

3 Responses to “Catching Up and Open Mic”