Ten-year-old Anthony Joplin has made it to double digits! Which means he’s finally old enough to play in the spades tournament every Joplin Man before him seems to have won. So while Ant’s friends are stressing about fifth grade homework and girls, Ant only has one thing on his mind: how he’ll measure up to his father’s expectations at the card table.

Then Ant’s best friend gets grounded, and he’s forced to find another spades partner. And Shirley, the new girl in his class, isn’t exactly who he has in mind. She talks a whole lot of trash — way more than his old partner. Plus, he’s not sure that his father wants him playing with a girl. But she’s smart and tough and pretty, and knows every card trick in the book. So Ant decides to join forces with Shirley — and keep his plans a secret.

Only it turns out secrets are another Joplin Man tradition. And his father is hiding one so big it may tear their family apart…

An ALA Notable Children’s Book Selection

An ALA Notable Children’s Recordings Selection

A Publishers Weekly Best Book of 2021

A Kirkus Reviews Best Book of 2021

A Booklist Editors Choice of 2021

An Indies Next selection

“A story about showing great courage and perseverance when life gets shuffled.” — Kirkus Reviews, starred review

“The ever-present game of spades is a clever thread that binds the story together … a compelling story of cards, courage, and compassion.” — Booklist, starred review

“Playing the Cards You’re Dealt, is a necessary tale about how some traditions are worth upholding, and others―especially those that harm people―aren’t. More importantly, Johnson with the deft hand indicative of all his work, gives us Anthony Joplin to show us there’s no such thing as “too young” when it comes to questioning big ideas like manhood, or even family.” — Jason Reynolds, New York Times bestselling author of Look Both Ways and Stamped

“Reading a well-written book is akin to watching an acrobat on a tightrope. And Varian Johnson is the best of acrobats―he’s made the task look effortless with an air of compassion, tenderness, humor, and a dab of magic realism.” — Christopher Paul Curtis, Newbery Award-winning author of BUD, Not BUDDY and The Watsons Go to Birmingham—1963

“The story and its characters are compelling, as is the omniscient narrator, who becomes increasingly involved in the tale. … Themes of addiction and consent are addressed honestly and compassionately.” — The Horn Book 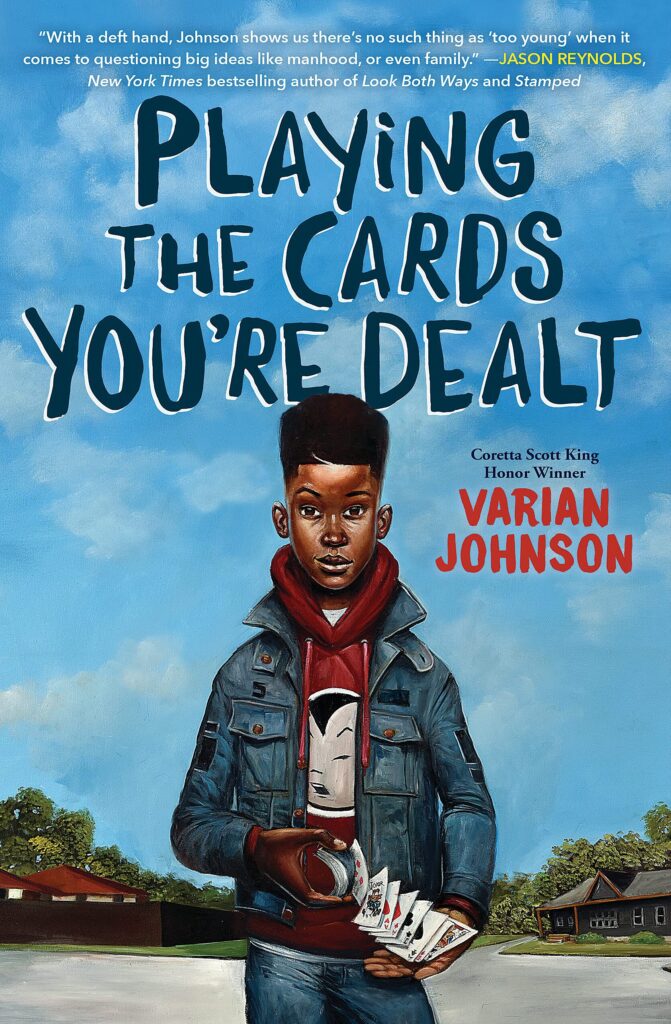